According to a 2012 study published in the Journal of Neuroscience, reactivation of information stored in the brain simultaneously strengthens access to and distorts the associated memories. Every time an event is recalled it is altered in some way and those alterations become part of the memory.

Similar to unfired clay that acquires fresh impressions every time it’s handled, the simple act of remembering alters the memory at its source, rendering it (presumably) less accurate with each occurrence.

In other words, the more you remember something, the less faithful it becomes.

This dispassionately ironic twist of nature can seem alternately cruel and charitable toward its subjects and their experience. Yet the affects of the phenomenon extend outward beyond the synapses, rippling through the stories we tell and the lessons derived at each retelling.

These findings and their implications have been a source of personal fascination for some time and are an underlying theme throughout this collection of work.

These paintings are about the distortion of memory over time and how that must affect our sense of identity on all levels—personal, cultural, spiritual, and so on.

Though composed indivdually, they are intended as pieces of a larger whole, with some designed to fit edge-to-edge in linear continuity—as if conjured by one another.

The compositions are drawn from projections of randomly captured and superimposed film stills. Overlaying the images fractures recognizable objects (and subjects) into new, abstract forms. However remnants of the original images persist, redefined in both form and context by the convergent imagery.

Not only is this process conceptually and physically reminiscent of memory distortion, it’s visually illustrative as well. The final paintings, with their prismatic approach to color and reality-adjacent treatment of bodies in space, attempt to visualize our quietly tumultuous struggle to preserve moments in time. Even if, in our desperation to hold on to them, those memories slowly give way to imagination.

Selections from this series are currently on display at Tongue in Cheek in St. Paul, MN.

Unflattering Portraits of Men in Suits

These paintings are about the absurdity of institutional authority and the dubious expectation that it be recognized and responded to with some customary decorum. This is a series of works on paper, each created within a single session and rendered in oil. The visual components come from newspaper photographs, superimposed and painted via projection.

Pilgrims is a series of paintings about establishing familiarity in a foreign place. By interweaving familiar imagery with obscure forms and relying on the viewer’s inclination to apply narrative, artist Jon Reischl creates a sort of harmony from seemingly discordant parts.

Paintings examining the nature of memory and the presence of mind through a cast of enigmatic characters and improbable settings. Mixed-media artist Jon Reischl interweaves recognizable imagery and obscure forms to create paintings that are simultaneously comforting in their familiarity and disquietingly foreign. 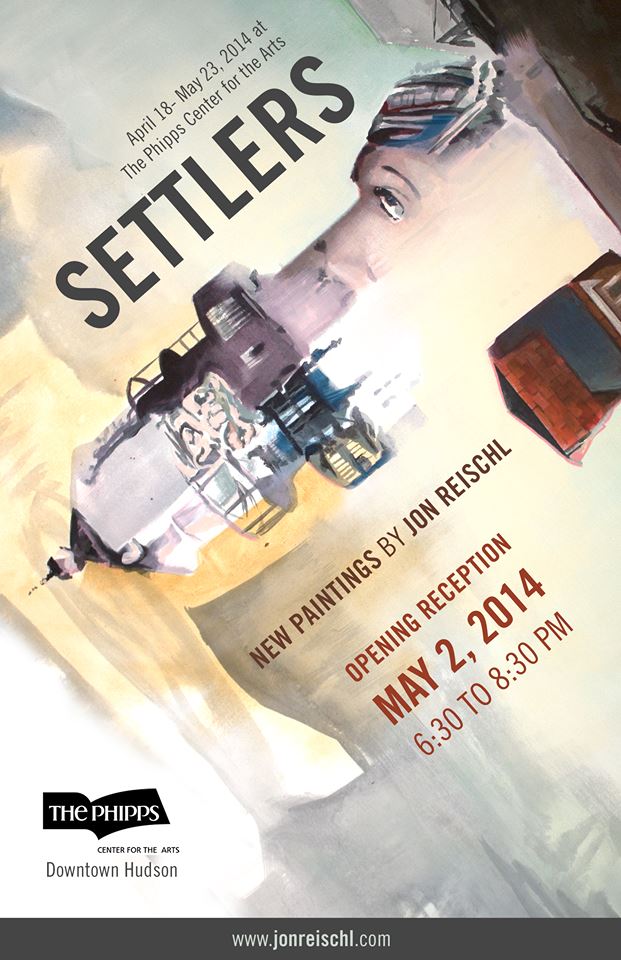 An Evening of the Odds

The show's title, An Evening of the Odds, with it's glib multi-entendre, is consistent with Reischl's fondness for wordplay, but also suggestive of the sense of resigned struggle present in much of his work. His subjects often seem to be, in one way or another, at odds with their surroundings, yet also at relative ease, as if to imply that there is contentment to be found amongst the chaos. Reischl's work covers familiar thematic ground, exploring the role of Creator by offering up the interpretive reigns to his audience. And in the case of his Variable Title paintings, blatantly encouraging them to physically interact with the pieces.

"The live being recurrently loses and reestablishes equilibrium with his surroundings. The moment of passage from disturbance into harmony is that of intensest life."

Each of these paintings features a device in the frame which allows the viewer to select a different title, this shifting of context effectively alters what the viewer sees while the image itself remains unchanged.

These are paintings that were commissioned privately and were created independent of any larger body of work.